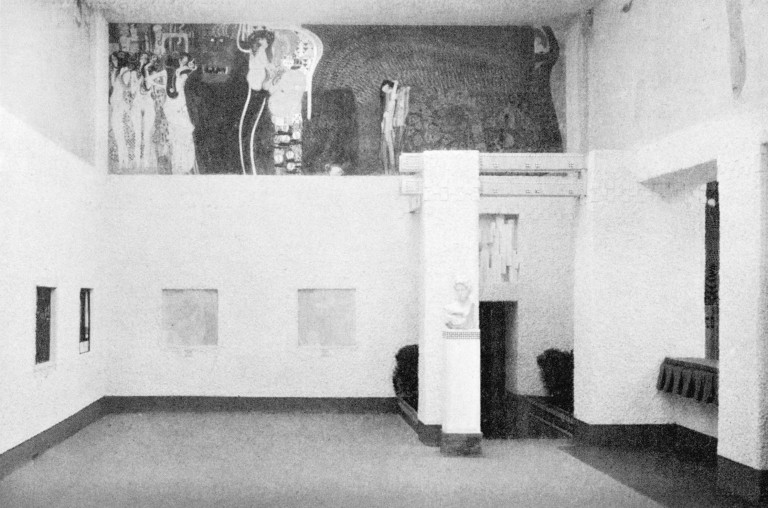 Klimt painted the mural for the XIVth exhibition of the Association of Visual Artists Vienna Seccession in 1902 devoted to works focusing on Beethoven’s Ninth Symphony. Originally placed in the left aisle of the exhibition, the 34m long mural was meant to be a temporary installation however it was carefully removed after the exhibition and reinstated on permanent display in 1983.

It represents Wagners interpretation of Beethoven’s Ninth Symphony, namely thus: The Yearning for Happiness, The Suffering of Weak Humanity, The Knight, who driven by Ambition and Compassion takes on the fight for Happiness (YEAH!), The Hostile Forces of Typhoeus (the horrific baboon with mother of pearl eyes), who is surrounded by his daughters – the three Gorgons – as well as Sickness, Madness, Death, Lasciviousness, Wantonness, Intemperance and Gnawing Grief. Quiet the badass posse ol’ Typhoseus had. After the maelstrom of the insane baboon and his cohorts, the frieze returns back to more pleasant territory with Happiness finding solace in Poetry depicted here playing the lyre. Then there is the void followed by the Arts where true happiness is found and you get to see a couple making out. Get a room, kids.