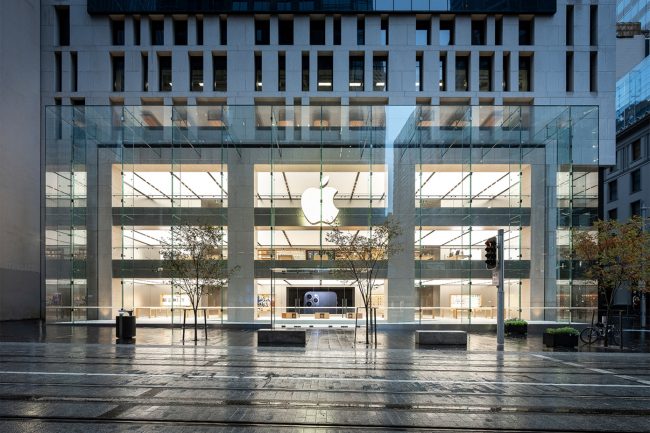 There was so much hype in Sydney over the past few weeks, anticipating the launch of Apple’s official presence in Australia; the Sydney Applestore.

It’s actually a little sad to learn that the store would be an annex to a new (and rather good lookin’) office building at the corner of King and George Streets. I was hoping that it’ll be a standalone, like New York’s 5th Avenue store.

Nevertheless, there was no drawback. The store is home to Sydney’s best glass facade. Put very aptly by Livee “The structural glass facade that almost puts others of its kind in the CBD to shame.”

Also, during the opening, the store featured a secret. But the secret was not a new iPhone or Macbook. The secret was the staircase. Eh? Architectural? This led me to dig around on the net, and found two interesting things:

1. Apple uses the same architects over and over again on all their Applestores! (wow, imagine the commissions and the glory. they must be proud architects. Bohlin Cywinski Jackson (BCJ) Architects are responsible for all Applestore designs, starting from the first ever flagship store on 5th Avenue. Now that store features the most interesting use of structural glass. BCJ also did Pixar’s headquarters, which is also owned by Steve Jobs. (Oh why didn’t I see that coming?)

2. Structural glass and minimal detailing. It’s all part of Apple’s concept. Who to carry it out? Engineers Eckersley O’Callaghan are the innovative minds behind the daring glass feats of the applestores. Normal glass joints are raided by loads of steel joints, just to make sure that everything’s in place and nothing breaks or falls apart. But hey… these guys get away with VERY MINIMAL METAL. So they show off the glass very well. And I read somewhere and I can’t remember this, so don’t quote me on this… That those metal joints are made of titanium!

Other than that, I find that the Applestore exudes design as much as possible, very much like their products. Minimalist and Functionalist. Keep things working and at minimal. There is a nice atrium space that ties up all 3 stories into a coherent whole. The glass facades go all the way down to the ground, leaving the sidewalk outside suddenly roofless. This exudes the “cube” effect of the glass box. (I also find it so contrasting that the glass box is about transparency, while the Apple company is certain not about transparency. No one knows anything about the iPhone launch at all! The staff look like they know. But they won’t tell you. ARH.

I wonder how they got past the requirement to have awnings and shade sidewalks. Because on the launching night, everyone was queueing up outside, getting wet in the rain while applestaff ran round giving away free applebrellas. Hmm…

Beautiful even lighting. It looks so even that it feels like natural sunlight!

Also, the walls are made of aluminum, the railings of steel. So walking on glass staircases is a daunting task; you can’t hold the railings, because the people cause friction and friction causes static energy. So your fingers will get zapped. And you can’t hold the walls, because the aluminum will zap you too. So do a tightrope stunt while walking down glass staircases. Fortunately, they’re frosted. (aww… too bad). If only they were clear. Things would be more exciting, won’t they?

From inside to Sydney Tower

The tectonics of glass are so minimal and so detailed that they don’t obstruct views from the inside. Too bad there’s nothing much to see besides NRMA’s towering funky curtainwall facade and general urbanism. Ahhh! But I don’t think that’s what Apple intends you to see. I think it’s more fun to watch the people. From the safety of inside and vice versa. Hang out at the atrium’s edge and you’ll see what I mean.

Me snooping around the store, testing the AppleTV.

Now all they need now… is an AppleCafe. Then it’s complete. I’ll have my lunchtime coffees there and never return to the office ever again..

Or apply for a job at Apple.