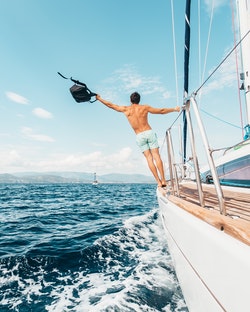 I am not one of those architects that knows about the wind. I am familiar with the sun, it rises in the east and sets in the west. The sun is easy and regular. It gets tricky, granted, when crossing the equator with the sun all of a sudden rising in the south and the momentary panic of not really understanding if it still rises in the east. The wind on the other hand makes no sense. As far as I can tell it just blows around a lot and any attempt to explain its patterns only results in confusing maps and graphs. If i lick my finger and stick it up in the air it does not whisper any sweet synoptic secrets in my ear, it just gets cold.

Architects who know about the wind tend to achieve a sage-like status. More often than not they reside in Pittwater, they sail and they are wrinkled. Their tools of the trade in wind-craft are: a furrowed brow, sweeping hand gestures and squinting into the distance as if to some cartographer’s cloud just over the horizon. And as proven in the following transcript nobody argues with someone who makes a statement about the wind:

As you can probably tell, I am not convinced that the wind is all that. Sure a cool breeze is nice on a hot evening but so is a cold beer and I don’t hear anyone giving anyone heartfelt lectures on the majesty of the Fisher and Paykel AF-P120SS; how its 115 litre capacity is just perfect for storing a case of VB tinnies, how the skin tingles in anticipation as you open the 6 Litre freezer door. As always knowledge is power and by virtue of the fact that not that many people know shit about the wind, the Wind Sages are playing it for all its worth.

Which brings me to the Architects Yacht Race, held last Thursday. Organised by Jeremy and Finghin, Tribe Studios entered a boat of misfits. Given that my only other previous experience with sailing was The Legend of Zelda: The Wind Waker in which I had little sailing boat that I controlled by changing the direction of the wind using a Magic Conductors Baton, I think I did okay. I pulled ropes and I winched ropes and i squinted up the sails in a sage-like manner. However I was not endowed with any further understanding of the wind which was evidenced by the fact that as soon as I took the wheel we nearly missed a buoy and missed running into a competitor by a whisker.

We sailed very slowly and although we did come in toward the end of the field we did not have pink and green bandanas or run into a tugboat like one team did. At least we understood wind better than those hacks.