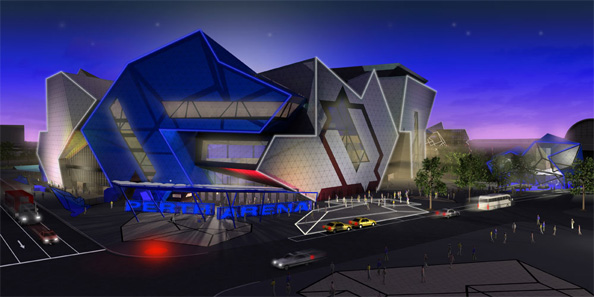 In this intriguing article accuses an unnamed un-linked-to Dutch architecture firm of stealing their ideas from Federation Square:

“There are distinct similarities in terms of groupings and massings of buildings with a large atrium space with more buildings attached to it, that’s where it starts to become almost too many points of similarity.”

But reading on, we find, I think, that the article is actually about the Perth Arena Project – a large multipurpose stadium, the competition for which was on the jury. The project has been designed by Architects and never one to be shy of basing design ideas on the thinnest of metaphors, we are told that

And so, suitably intrigued by the gymnastic geometry in the rendering, I was prompted to check out just exactly what these
‘Eternity Puzzles’ are. Complex algorithms describing unknown geometry, something to do with string theory? Quite unexpectedly however, it turns out that the ‘Eternity puzzles’ are actually just one Eternity Puzzle and that it is in fact not a ‘formula’ but a boardgame. Wolfram Maths World tells us that the puzzle was “devised by Christopher Monckton and consisting of 209
pieces, each of which is a 12-polydrafter (i.e., a compound of 30-60-90 triangles). The puzzle was introduced in Britain in June
1999. The goal of the puzzle is to arrange the pieces in the shape of a slightly nonregular dodecagon.” Where this particular boardgame
differs to others is in the fact that a 1,000,000 Pound reward was offered for anyone who could solve it before the deadline of September 2003.

And so even with the solution to the puzzle freely available online, appear to have had a bit of trouble forming the pieces into a slightly nonregular dodecagon; and like the frustrated two year old unable to make the triangle fit into the square hole on the red cube, have resorted to mashing all the bits together as hard as they possibly can.

It is a shame, as in amongst the rhetoric, are capable of producing some good work, tackling complex geometric problems and not the lease of which is where they explored forming three dimensional typography into a building.

In the case of the

however, it is clear that the use of the Eternity Puzzle, sorry, “Eternity Formulas” goes about as deep as – hey, look at all these cool triangular-ey shapes! So why bother mentioning it at all? Are they just weasel words used to confuse the masses into thinking that the geometry is formed by processes that they just don’’t understand?