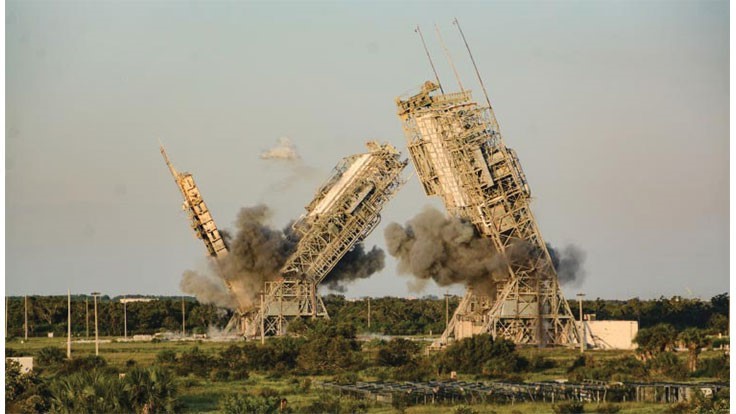 The Zip Feed Mill in Sioux Falls was scheduled for implosion the other day, but instead came off as an unintended Pisa. The footage is quite wonderful, the building lurching to the side, collapsing just a bit and then stubbornly staying put.

It seems that the whole thing was doomed from the start:

“One of the few people not smiling was Jim Redyke, who supervised the explosion for Dykon Explosive Demolition of Tulsa.
…
He said there was nothing that could have been done to prevent the non-collapse; the concrete was apparently too old to maintain its integrity after the blast. Old concrete structures like the tower are “the toughest structures there are” to demolish with explosives, he said.”

There was nothing to be done to prevent the non-collapse… Well, what were you doing tying to implode it then?

Anyway, I like this non-collapse stuff. It could be a whole new field of engineering – Non-Collapse Prevention! Preventing your buildings from maintaining their structural integrity. They have their work cut out for them though – there are thousands (more!) of buildings around the place that are constantly not collapsing. If these people are serious about their Non-Collapse Prevention campaign, then

Meanwhile, down south, a couple of months ago some more Non-Collapse was prevented when the footings were blown out of an apartment building in Artarmon, Sydney. You see, Sydney at the moment has gone a bit tunnel mad. We can’t get enough of them. The cross city tunnel has been completed and nobody is using it, due in part to the mysterious, complex mathematics involved in determining the toll required to enter coupled with the fact that the citizens of Sydney feel it is their duty to punish the State Government for screwing up the cities roads in an attempt to funnel traffic into their cashcow while making the CBD impossible to navigate. But this is a different story for another time… right now the mole men are tunneling under Artarmon and Lane Cove to free up the congestion that hits Lane Cove between the M2 and the Gore Hill Freeway.

However they made an eency wittle mistake one day and a little bit of the tunnel collapsed and brought down a corner of the apartment building above with it. oops.

Looking at the apartment building in question, a red-brick three storey walkup, it is probably the best thing that has ever happened to the owners – rescued from mediocre housing by a giant tunneling worm.