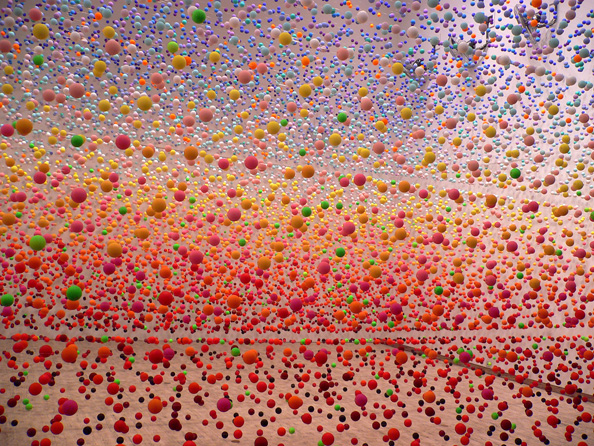 “Adventures with Form in Space” is the theme of this year’s Sculpture Project. And it is a particularly good year.

Hot on the heels of NASA’s announcement that Dark Matter exists, comes accurately title installation “Atomic”. It is an amazing room of freeze framed atoms that apart from some maverick dad letting his daughter play and tug at the sculpture, leaves the assembled viewers quietly agog. Suspended polystyrene balls held in place on nylon wire fill the room in a rough grid, running though the spectrum from reds to blues up the room with a few rogue orange balls escaping their hue, bubbling up into the cooler tones.

Occasionally a set of industrial fans blow the whole thing into a jittery field of wobbling uncertainty. Like most things the balls soon reach their natural frequency and begin bobbing in time, like a matrix of nervous junkies. Left going, one wonders if the combined power of each row’s low harmonic resonance would be enough to unsettle the stability of the gallery walls bringing down the building in a vision of an apocalyptic Ikea ballroom.