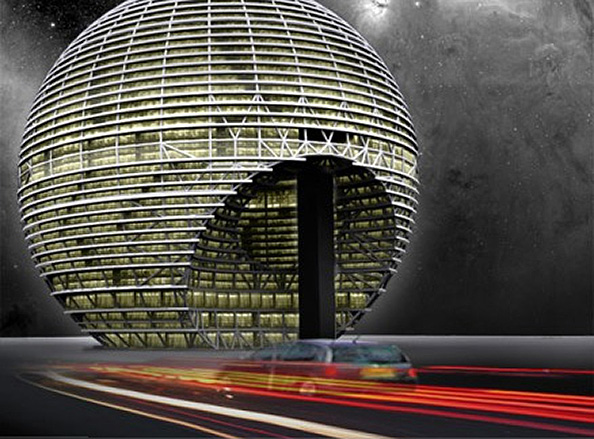 The project is for the RAK Convention Centre and Exhibition Centre in Ras Al Khaimah, UAE and comprises of a large sphere, booleaned by other large spheres and a long linear bar.

“What is left to be invented when it comes to the creation of a landmark?

So far the 21st century – in a desperate effort to differentiate one building from the next – has been characterized by a manic production of extravagant shapes. Paradoxically, the result is a surprisingly monotonous urban substance, where any attempt at ‘difference’ is instantly neutralized in a sea of meaningless architectural gestures.

RAK is confronted with an important choice: Does it join so many others in this mad, futile race or does it become the first to offer a new credibility?

This project represents a final attempt at distinction through architecture:not through the creation of the next bizarre image, but through a return to pure form.”

Pure form. Yes indeed. The immediate comparison is not, as I know you are all thinking, Boullee, nor is it the Deathstar. Sure at first glance, it may appear to be the planet destroying super structure of our dreams – it is big, it is round, it has craters. But as we all know the deathstar only had the one crater, the one from which the laser beams were focused on Aldaraan with such pleasing results.

So if not the Deathstar or Boullee, then what?

Released in the early seventies Panapet by Panasonic is a small transistor radio. It, like the convention centre, is not in space, is round, has several craters and it has no lasers. It is funny; the Panapet dates back to 1972 (I think), five years prior to the release of A New Hope and is such clear precursor to the Deathstar and yet it never gets a mention. Geonosian industrialist, Poggle the Lesser, Raith Siener and Imperial Officer, Grand Moff Tarkin get all the credit with poor little Panapet not rating a mention.

And so now, thirty years later, the strange little radio has spawned a second behemoth offspring, this one in the desert, on the outskirts of town, biding its time.