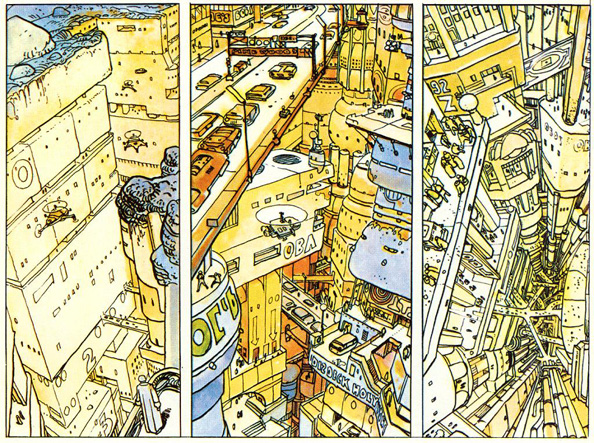 The Big Tomorrow is a short, twelve page, comic produced in 1956-76 which tells the noir story of a private detective hired to pick up a parcel for a sultry dame. It has a stock noir plot and the writing is pretty terrible.

But the art and the world it depicted was visionary; a world that is one giant, teeming, vertical metropolis. A super dense cityscape with skybridges and anti-gravity chutes. If it is familiar, then it is because it was a big influence on Ridley Scott and The Long Tomorrow depicts a world strikingly similar to Scott’s Los Angeles in Blade Runner.

William Gibson too, was aware of Moebius’ art and cites it as an influence in the germination of cyberpunk and the future imperfect:

“Years later, I was having lunch with Ridley, and when the conversation turned to inspiration, we were both very clear about our debt to the Metal Hurlant [the original Heavy Metal magazine] school of the ’70s–Moebius and the others. But it was also obvious that Scott understood the importance of information density to perceptual overload. When Blade Runner works best, it induces a lyrical sort of information sickness, that quintessentially postmodern cocktail of ecstasy and dread. It was what cyberpunk was supposed to be all about.”